All in with ic! berlin

“It was really from the first moment,” says Ralph Anderl, the flamboyant co-founder of the Berlin-based eyewear maker ic! berlin. He’s ... 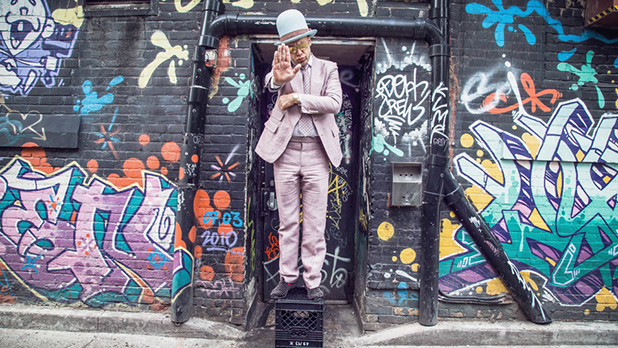 “It was really from the first moment,” says Ralph Anderl, the flamboyant co-founder of the Berlin-based eyewear maker ic! berlin.

He’s referring to the instant he realized the potential in a unique glasses design two friends had come up with, requiring no screws or glue, which they hoped to sell to a German manufacturer.

“I saw the hinge, the magic of this connection of two metal pieces without any screws. For me, it was clear immediately. I could see the whole thing.”

He leans against the fence of someone’s front yard on a nondescript residential street off Toronto’s Queen Street West. Anderl came to the city as part of a trip to raise consciousness of ic! berlin outside of Europe. After speaking with him for several minutes, it’s clear why it needed to be him who made the trip.

Once he saw his friends’ design, Anderl wanted to build a company. At the time, he was a student working on a culture studies PhD. “University was always just talking about everything,” he says. “At the end of the day, it was always, ‘Well, it’s a complex issue.’ My intent was to do something real.”

Ralph Anderl poses for FAJO during his trip to Toronto earlier this summer.

But, faced with partners who were more interested in selling their designs to someone else, an industry that wasn’t all that interested anyway, and a notoriously fickle German consumer base, he had to get creative. Anderl wrote to and eventually befriended German celebrities. He sold paper promises of glasses to be made in the future. Lacking a booth at a trade show in Milan, he skulked around the grounds in a trench coat, opening it like a drug dealer to passersby, to reveal the many frames stashed inside.

Stunts like that got the brand noticed, while its eyewear designs and construction drew customers in. Six years later, Anderl’s glasses and sunglasses—mostly made from sheet metal, with the patented screw-less hinge design—can be found in shops around the world, and on the faces of people such as Madonna and Brad Pitt.

But Anderl keeps alive the ethic and eccentric spirit that brought his company to where it is now. Part of that involves being a living extension of the brand himself. It’s clear that being ic! berlin’s mascot is something he has a lot of fun with. Anderl recalls a trade show in South Korea, standing under a giant banner with a photo of himself on it. “There were some students coming who didn’t know the company,” he says. “One of them asked me, ‘Is it you on the banner?’ ‘Yeah, it’s me.’ ‘Oh… may I have an autograph?’”

Anderl likes to have fun with the brand, never taking himself too seriously.

Anderl’s ethos is also a reflection of the city from which ic! berlin takes its name, and where its glasses are still produced. Not originally a native of Berlin, Anderl was drawn to the city for its ultra-low cost of real estate, and the exploding bohemian class that came with it. “It’s one of the key reasons why we exist,” he adds. “We had a relatively long time where we could play like kids and didn’t need to be serious immediately.”

The low cost of real estate allowed him to buy a building big enough to do relatively large-scale production in-house, something he considers crucial. But the city’s unique character is also an inspiration. Many of the frame model names are taken from parts of town, including “Am Friedrichshain” named after the ultra-hip east-end neighbourhood, and “Treptower Park” named after the former airport now turned into a massive park. On the company’s website, employees share their favourite hidden spots in the city, and Anderl insists visitors to Berlin take a tour of his production facility as part of their trip.

Hearing him speak, it’s clear he wouldn’t move the company elsewhere. “In Berlin, it’s OK if you have half a job,” he says. “And it’s not about status. Munich is the city where you need to have the right car, the right girl, the right brand for clothing and bags. In Berlin, you don’t make it into the club if you’re dressed up.”

It’s a spirit Anderl hopes to keep, despite the brand’s growth over the years. Though his extensive CV lists such lofty future accomplishments as “President of the Bundesrepublik Deutschland” from 2034-44, he intends to keep the company independent and maintain the production in Berlin, “to live our philosophy.”

Anderl raises his voice to tell a story over a passing garbage truck. He found himself in Brazil during the 2014 World Cup and, despite the company’s celebrity endorsements and global presence, decided to slip into the Brazilian soccer team’s camp to distribute the product. “My girlfriend just walked in saying she was a fan from Germany, and wanted to put some glasses on the guys,” he says. “You just have to try things and do it. You might be surprised by the results.”